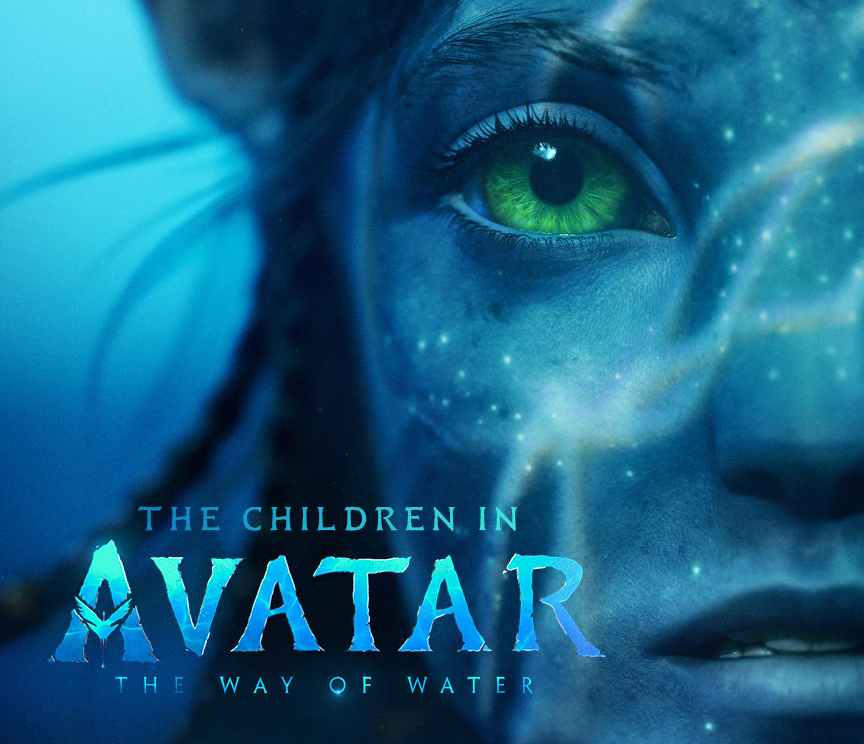 This here is a follow-up blog post for this one here: Avatar 2: The Way of Water – Teaser Trailer Synopsis (updated)

The trailer’s just out, basically and heads are already almost exploding, because everyone’s been wondering who is who, concerning the Sully kids. A lot of thinking, pondering, contemplating, theorizing, comparing, discussing has been going on. This has been the collaborative work of nawma Neytiri, Wameyn, Mako and me since the leak, without their additional brainpower and very interesting finds and takes I’d probably be curled up in a ball in a corner of my room by now, haha.

So, the pondering and debating has not been in vain, I think together we actually got something that’s at least plausible. Of course any trailer that would give too much away would be a bad trailer, so everyone’s got to work with what little is thrown at them, and of course we’ll only know for sure once the sequel hits the theaters, but until then, all we’ve got is busting our goddamned brains about this! xDD

A quick summary for anyone who’s having problems with the names already:

Jake and Neytiri are the parents of the Sully kids:

Updated theory on who is who

Here’s what we think about this, starting with the very likely most important character out of all of them, because she’s on the fricking movie poster: 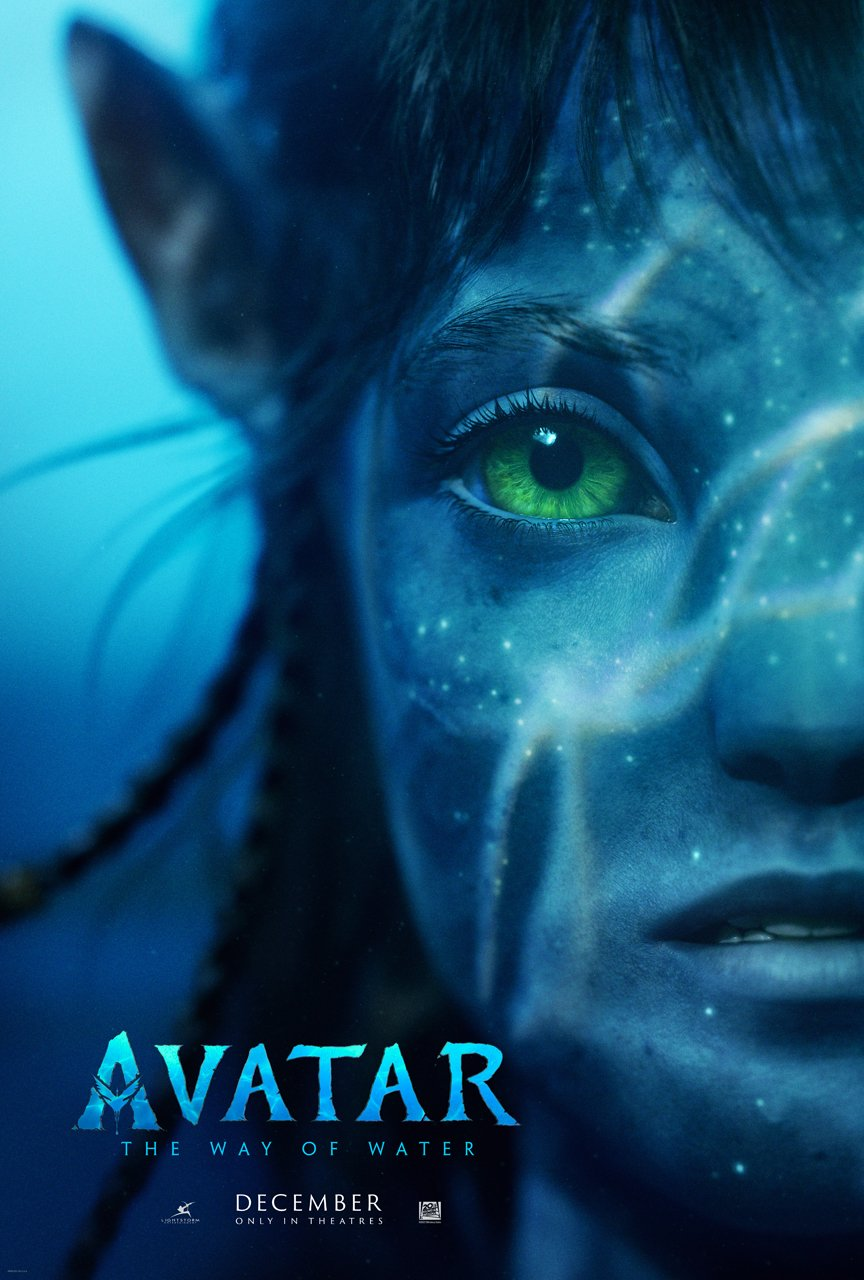 My mistake has been all along to assume that she is one of the Sully kids. She’s most likely not, even though she may be an adopted child like Spider. She is, however, definitely of human descent, because she has human-style hairy eyebrows, a very narrow bridge of the nose in comparison to other Na’vi, and she has 5 toes, which means 5 fingers, which means “human hands”: 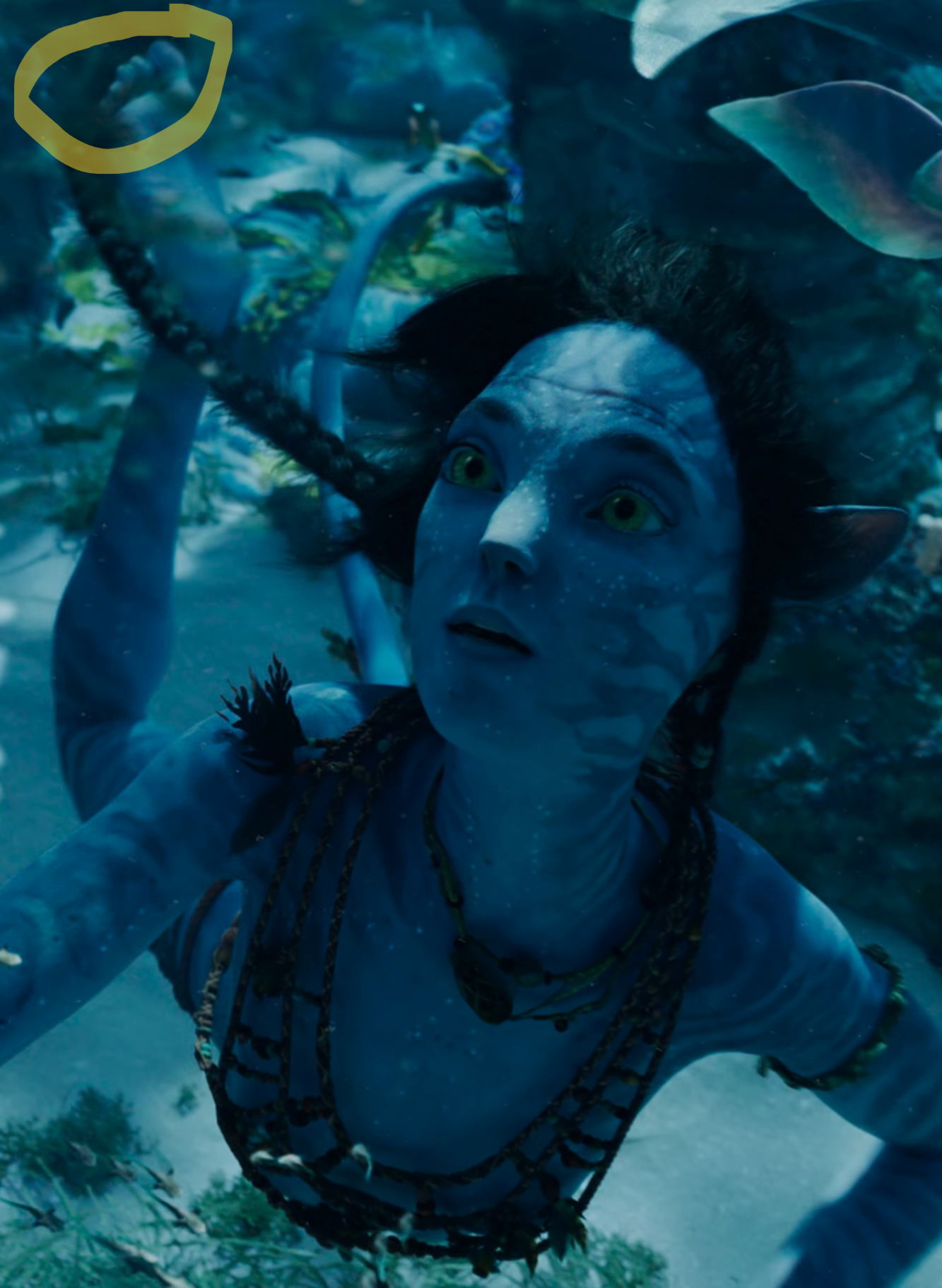 The necklace she wears definitely is the one Grace wore in Avatar 1: 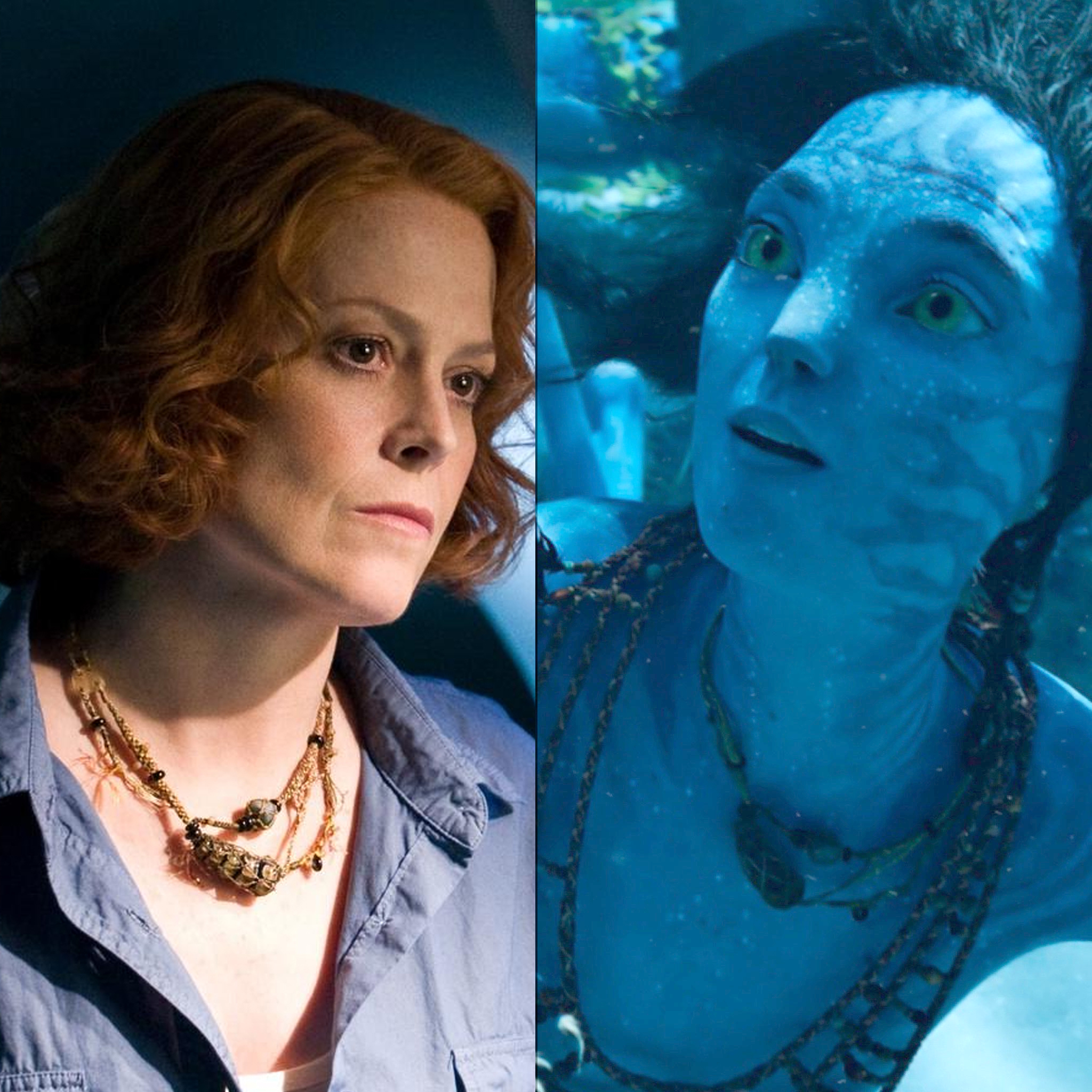 And her skin pattern (fil) on her forehead are almost identical to the ones Grace’s Avatar had: 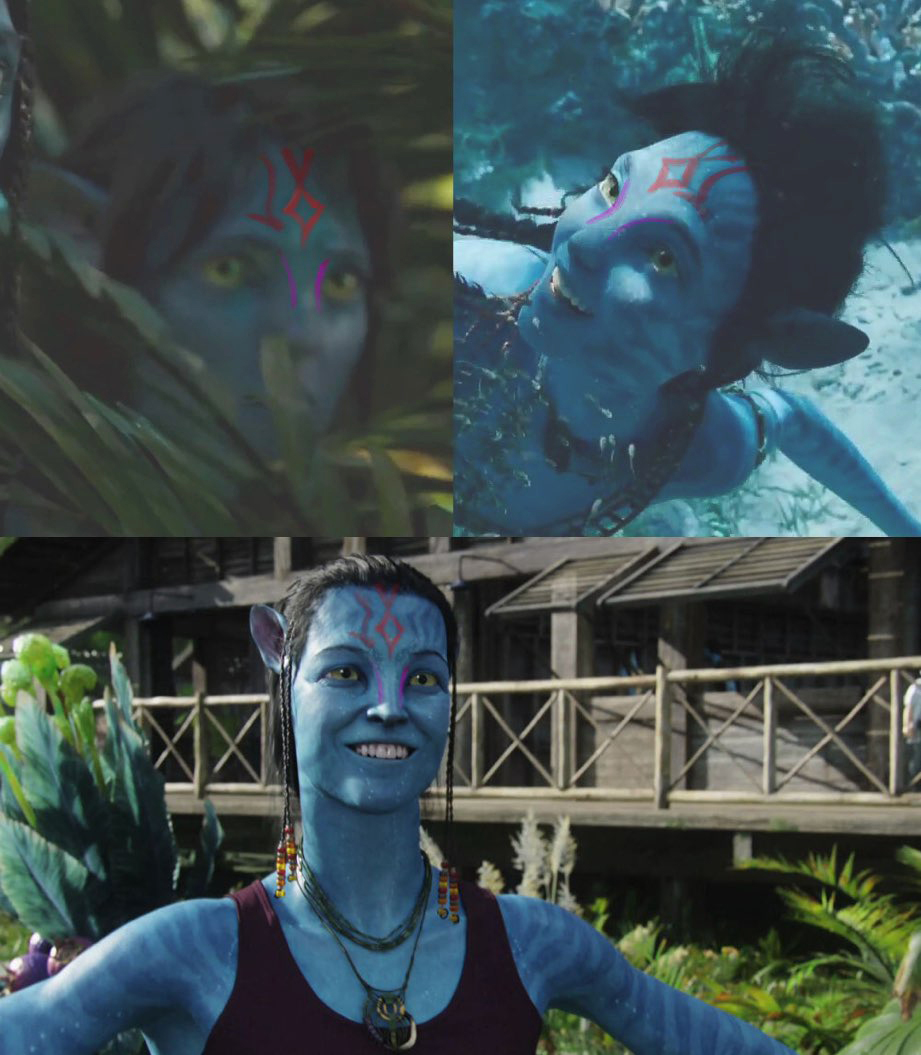 Not my find, but lo and behold…

Also: Grace… Kìreysì… Kiri… or even, hold your hats, ma frapo: Kìreysì + Neytiri = Kiri? xD Eeeh, maybe too far-fetched, but who knows! And her somehow being connected to Grace would also explain the visible joy on her face while exploring corals underwater (Grace was a Xenobotanist): 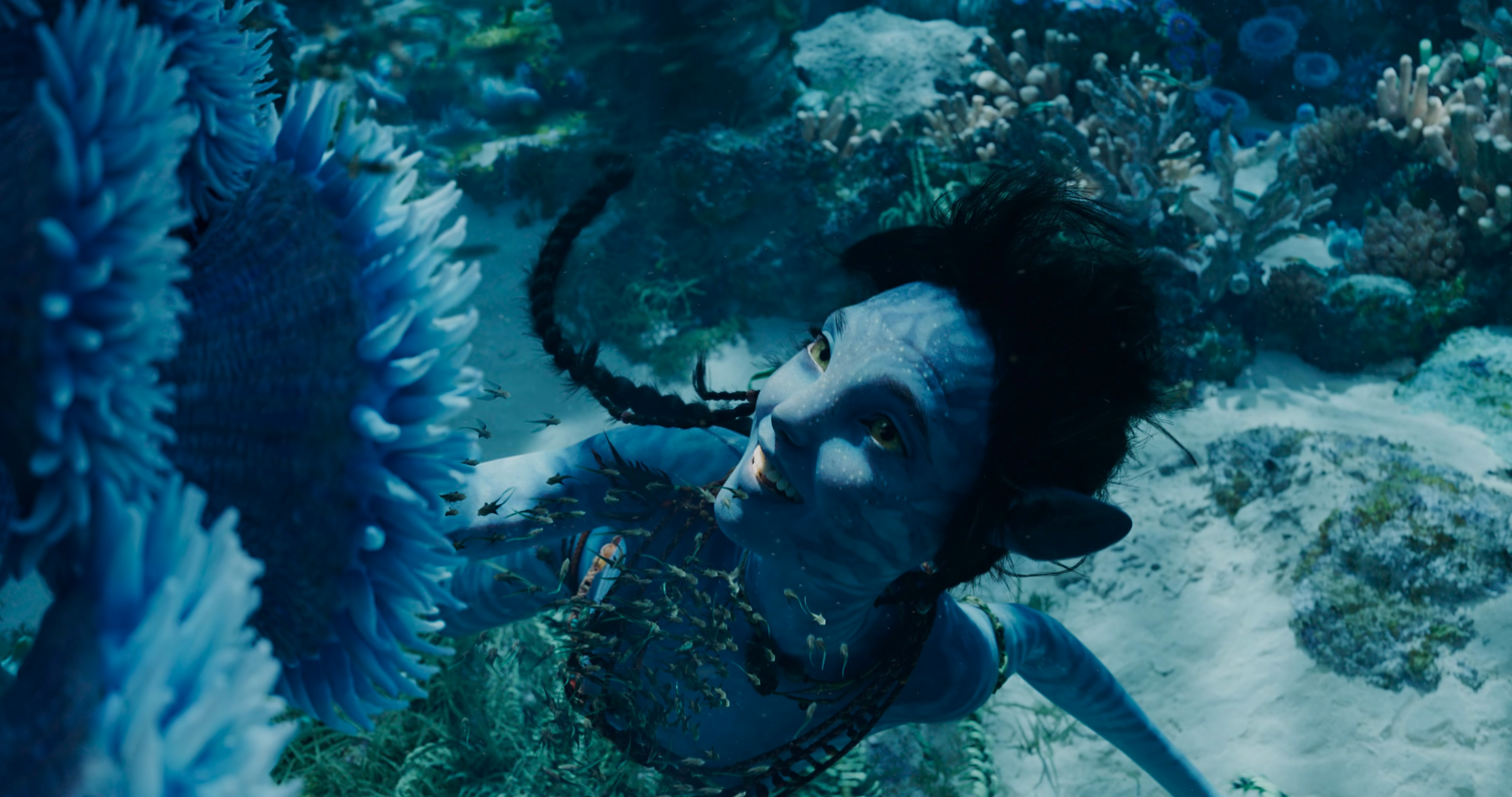 Or while enjoying a ride with an ilu: 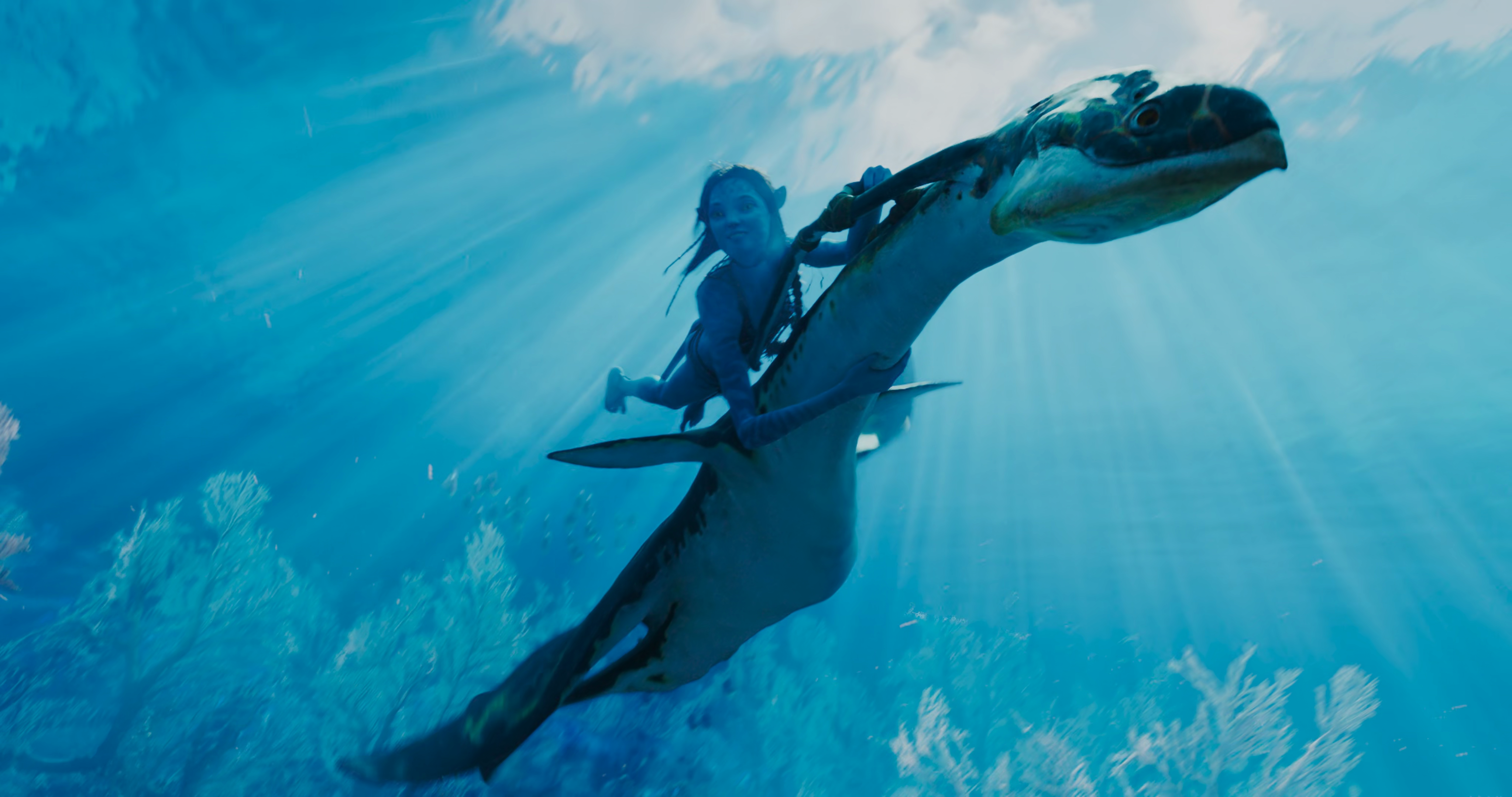 It would also maybe explain why the new Avatar comic “Adapt Or Die” is released the same week the trailer was and before Avatar 2 is up next (the comic will have 6 issues, will take some time to release them all), and not a year ago or so. In that comic we follow mainly Grace and Mo’at before Avatar 1 took place, allowing us a closer look at who Grace was. Kiri being somehow connected to Grace in Avatar 2… Grace, Grace everywhere! Anyhow.

Kiri is definitely female, because her feminine body and facial features are kind of obvious, when looking closely: 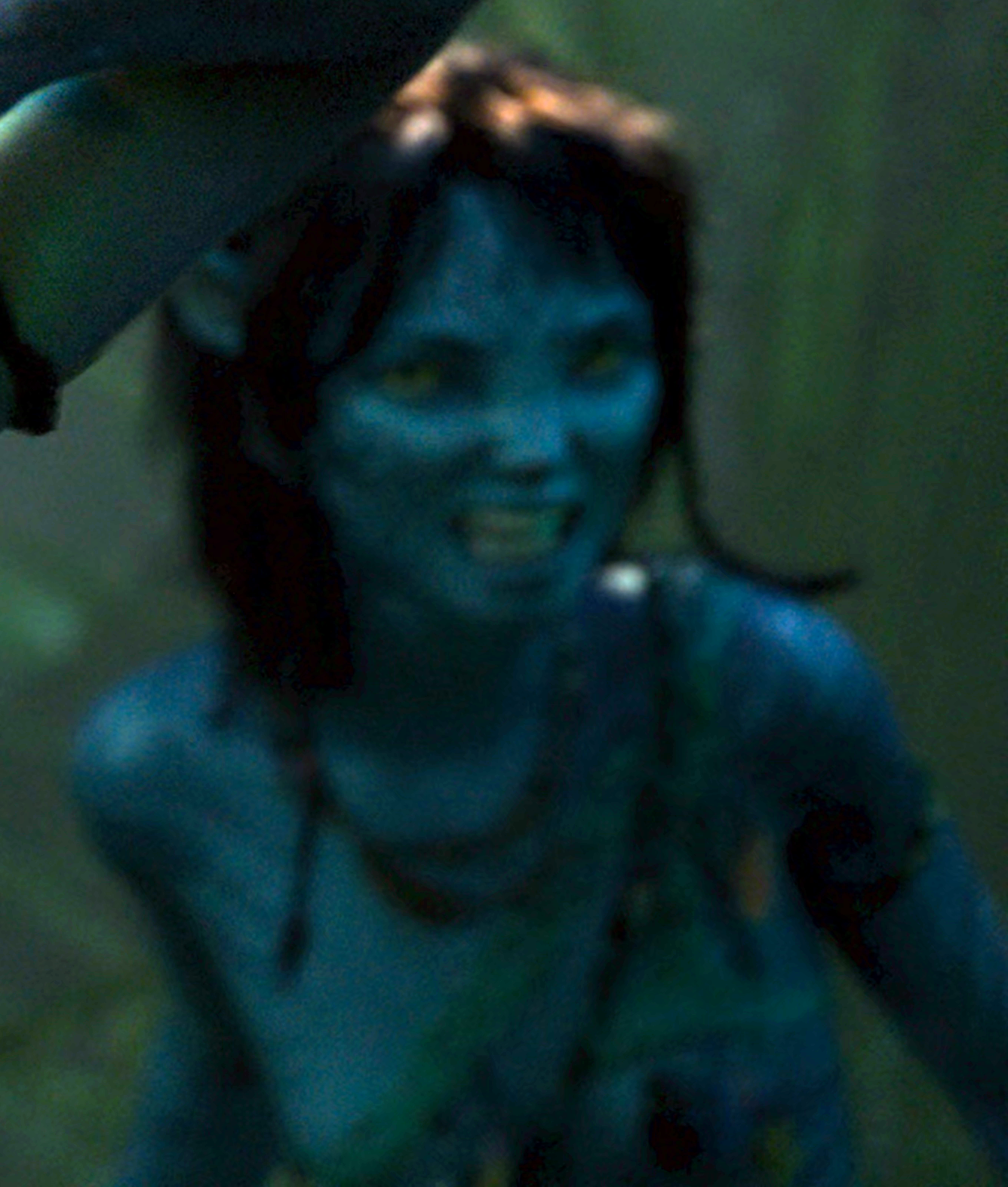 And when compared to male Na’vi her age, it becomes apparent, even in the opening scene of the trailer, that she is not male:

Since Kiri is on the movie poster, she must play a key role in Avatar 2. And with important characters like that you don’t take any chances, so the skin pattern and necklace, the resemblance to Grace and her obvious human descent are not a coincidence. Why she resembles Grace and wears her necklace… well, I still think some DNA-fuckery by human scientists with a bit of Eywa’s help are not impossible. If she is a reincarnation of Grace… or just a “clone” of sorts of her Avatar… who knows.

Why we think she’s called Kiri? Because media sources have been calling her that: 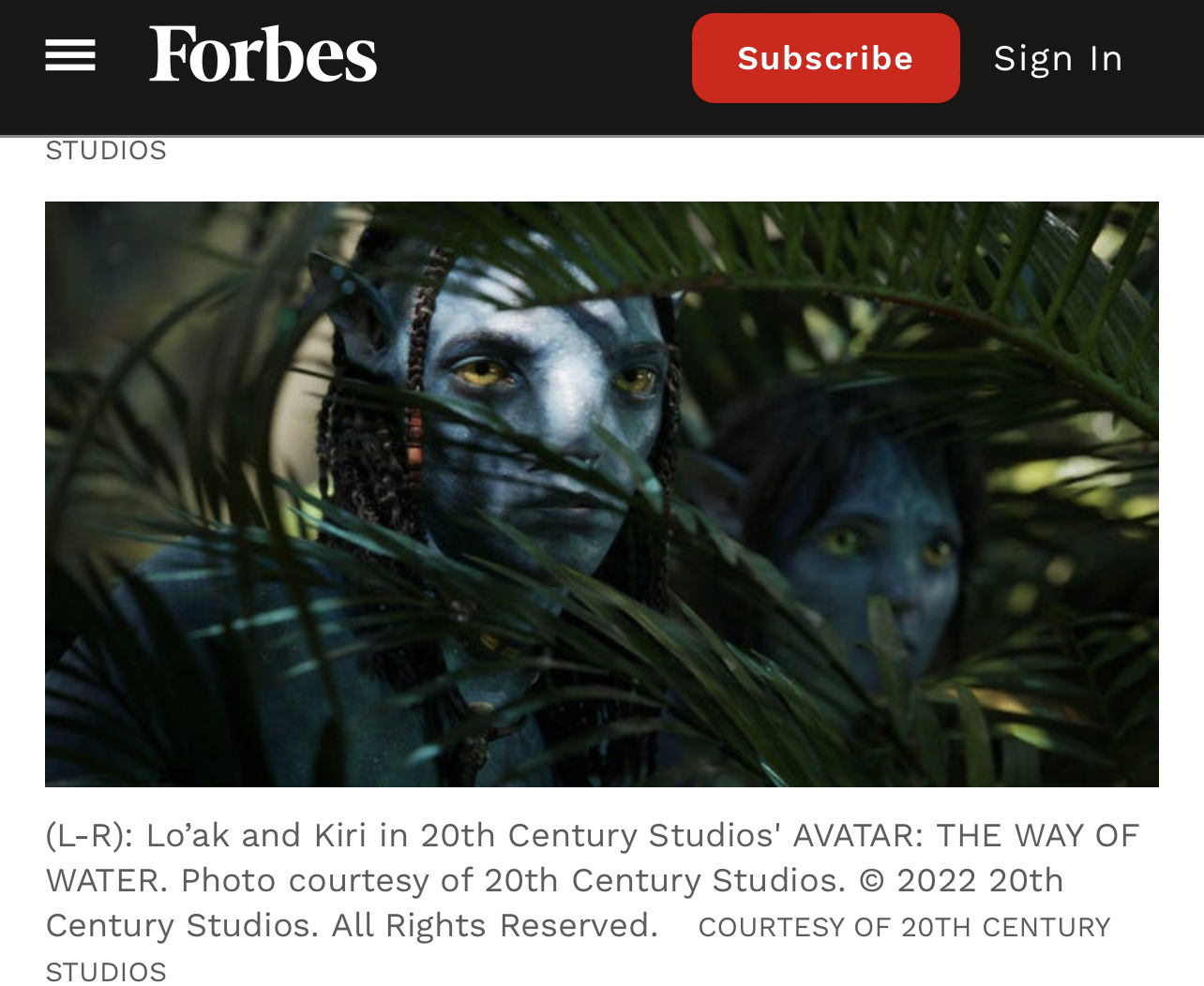 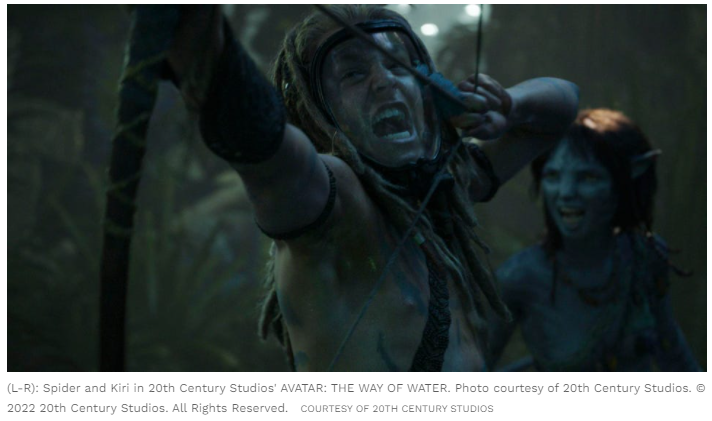 Same media sources that have been calling Ronal “Ronal” before everyone else knew it was indeed Ronal. So there might be something to that, and for the sake of distinction, we’ll go with that name as well, because it’s all we’ve got so far.

Which brings us to…

Who I first thought is Neteyam, is not Neteyam, but Lo’ak. Let’s compare faces:

Comparing jaw lines, Wameyn thinks Britain Dalton is our winner. And Ney and I agree. The prominent high cheek bones and the structure down to the chin are just too distinctive.

Which means Forbes was right, this is all Lo’ak:

Why we think this is a tulkun and not a nalutsa or akula? Well, because same media sources that were seemed to know about Ronal and Lo’ak + Kiri longer than anybody else called this creature a tulkun… plus, there’s the movie title of Avatar 3 (see end of this post) ;)
If you want more reasons why this creature is most likely a tulkun, here’s a follow-up post: The Tulkun Conundrum – Avatar 2: The Way Of Water

So, the other son the Sullys have is Neteyam, the eldest of the Sully bunch (yep, the same child Neytiri was pregnant with when Avatar 1 ended [deleted scenes]).
Why isn’t he in all those still images? Where’s he at? Well… if I had siblings who were at least 3 years or so younger than me, I wouldn’t want to spend all of my day around them, would you? Neteyam is probably busy seriously preparing to become a hunter, training for Iknimaya, or he even has completed it already at the time Avatar 2 takes place. No time or patience for the young annoying bunch of brats who want to play “palulukan and yerik” all day in the forest.

Maybe this is why, in the trailer, we see Neteyam clearly only in one scene:

Here it makes sense that we see him, because the Sully family probably basically just arrived in the village of the Metkayina, and as an act of hospitality, Tsireya is showing them around, and how could even a proud hunter-to-be deny that offer.

We never see all of the Sully kids clearly and sharp together in one scene, tho, and this is probably for good reason. To confuse nerds like us, hrhn! ;D The only scenes where we see all of the kids together, including the adults Jake and Neytiri, is when they fly on ikran. Neytiri anawm dissected these still images here: https://docs.google.com/presentation/d/1LY8muGMHoMBKO2nb_cIlkYpLz3FmuhBZFZrEil5WSIU/edit?usp=sharing (that title, lmao)

Which leaves us with the last one of the Sully kids left:

She’s the youngest and only daughter of Jake and Neytiri. We see her also in the following stills, and size, body shape, hair and finger count pretty much match: 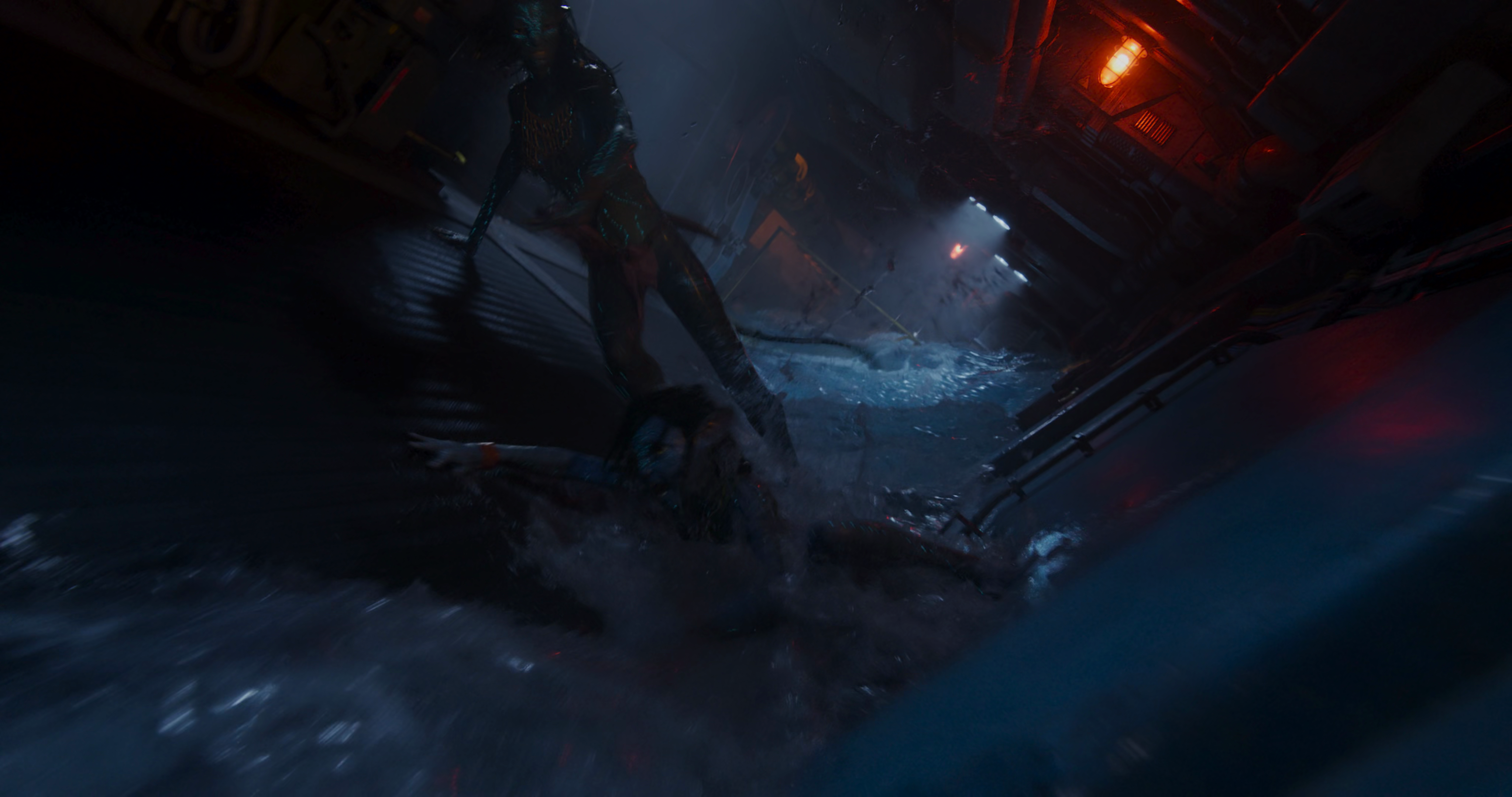 A closer look at her face: 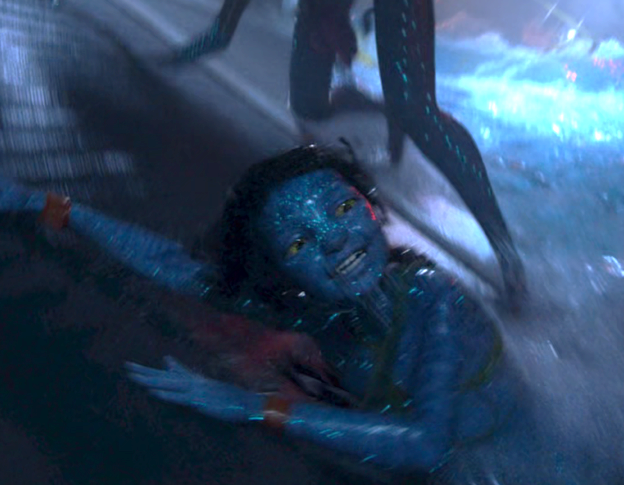 Given the screen time and the importance that apparently is put on these two characters, Kiri and Lo’ak will likely be the new protagonists in Avatar 2: The Way Of The Water. And if Lo’ak really bonds with a tulkun… well… have you heard that Avatar 3 (or was it 4?) is supposed to be subtitled “The Tulkun Rider”? *wink wink nudge nudge* ;)

So I’m going to leave you with one last still: 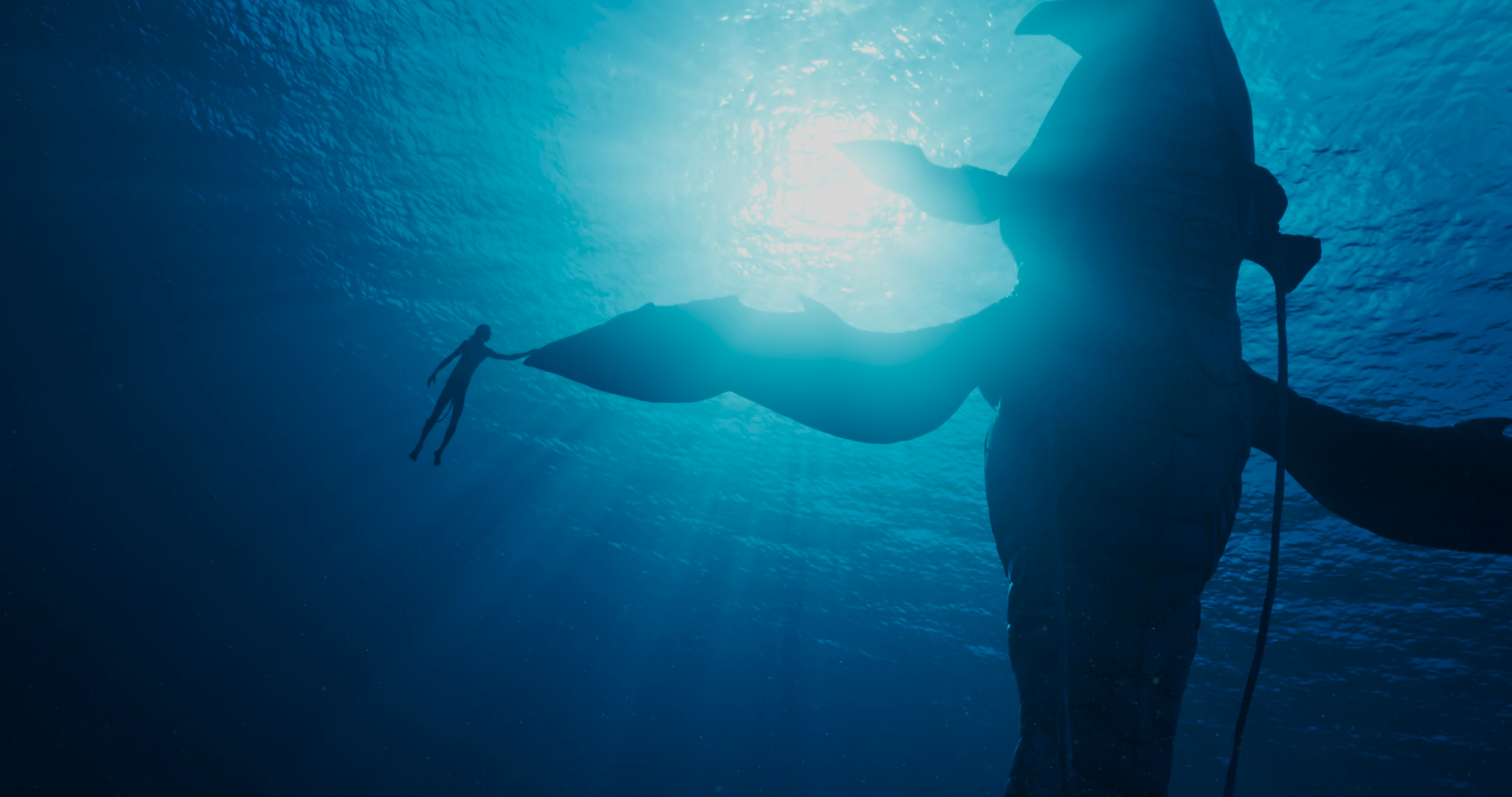 3 thoughts on “Clearing Up The Confusion About The Children – Avatar 2: The Way Of Water”

This site uses Akismet to reduce spam. Learn how your comment data is processed.